This weekend, almost 50 years after it was taken, the uncropped, unstretched version of the cover of the Beatles’ Rubber Soul reared its head.  It was immediately shared, posted and drooled over thousands of times. It was even news in The Examiner. Two days later, it’s still unclear where the picture came from or if it’s even real.  Still, it’s a sight to see…. 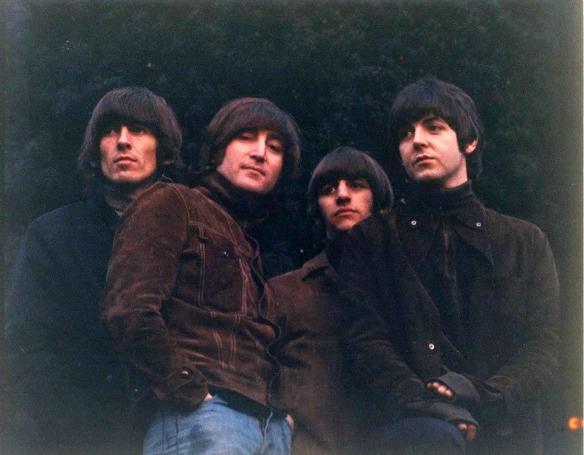 The picture was taken sometime in late 1965 near John Lennon’s house in Weybridge, either in the woods (according to Beatle biographer Mark Lewisohn) or on his property (according to photographer Robert Whitaker). In his book The Beatles – A Private View, Freeman recalls…
“For the cover I wanted another angle of the group and an entirely different tonality – greens, browns and black, but with an almost monochrome look. The garden of John’s house in Weybridge had the right elements – a high, dark green hedge and a grass knoll that sloped away steeply. This provided the background and the angle.”

Famously, Freeman showed the band some of the results afterwards by projecting slides of them onto an album-sized piece of cardboard.  Once they’d chosen the one they liked best, the cardboard slipped, elongating their faces and illuminating light bulbs over their probably stoned heads. It perfectly fit the album title, a play on “plastic soul”, nickname they’d heard black musicians had given Mick Jagger. So the famous photograph was developed to make their Mt Rushmore-like faces look slightly stretched on the album cover, along with a hand-drawn logo by graphic artist Charles Front and no mention of the group’s name, which was unheard of at the time. Front’s original logo sold at auction in 2008 for £9,600.

It was probably some crazy Paul Is Dead conspiracist that figured out if you turn it upside down and look in the mirror, it looks like “Abbey Road”. Let’s see here. Er, Road Rabbey? Now THAT is a stretch.

From BeatlesWiki.com…
“We were very pleased with the way everything’s turned out. We all think it’s just about our best LP. I can’t wait for it to come out. The sleeve’s finished too, and the picture on the front is pretty good!”      —George Harrison, 1965

“When we came to choose which of Bob’s (Robert Freeman) photos we should use for the cover of Rubber Soul, he visited us at a friend’s flat one evening. Whilst projecting the slides on to an album-sized piece of white cardboard, Bob inadvertently tilted the card backwards. The effect was to stretch the perspective and elongate the faces. We excitedly asked him if it was possible to print the photo this way. Being Bob, he said, ‘Yes,’ and the cover to our album Rubber Soul was decided.”—Paul McCartney, 1965

Many people swear they’d seen the full photo before but it’s pretty unlikely.  I found a story of one of the original Apple Scruff girls (fans who used to hang around Abbey Road) showing up to a Beatlefest convention with an unreal collection of photos that included this picture. Photographer Robert Freeman hasn’t published outtakes of many of his Beatle album covers (With The Beatles, Beatles For Sale & Help! plus both of John’s early books In His Own Write and A Spaniard In The Works) though some have leaked out. What most people think that they saw (myself included) was an unextended version of the album cover that has roamed the internet for years, probably done with Photoshop.

So where did this uncropped one suddenly come from? The reliable Beatle obsessive site  WogBlog originally said it started circulating on Facebook last night but a few friends of mine shared it two days ago. It’s been re-uploaded by many Beatle related sites but none seem to have done it before Scott Bennett, a member of Brian Wilson’s backing band.  Because of the major LA pop folks in his circle, it was shared over 70 times by big deal pop historians like R. Stevie Moore and Mike Stax, the first two friends that I saw share it. A repost on Beatlefan‘s Facebook has already been shared over 1100 times. It has been sourced to the tumblr site of one Diego Galarce Fuentes, who posted it on his page atraetormentas, where it’s already received 2683 notes and reblogs.  But Fuentes posted it the day after Bennett, even though he has the good taste to have Blur’s 13 as his avatar. This morning, WogBlog added a note saying it found the photo on a Russian forum first but they still might be mistaken on how early it was on the ol’ F-book.

Whether it’s real or not, it’s definitely an amazing thing to surface after so long.  Guys think they look cool.  Girls think it’s the sexiest picture ever taken of them, whether that’s a stain or a shadow on John’s pants.  Everyone agrees on one thing: John looks great in that jacket.  The Beatles were way into Dylan and it’s not unlike the one he wears on the cover of The Freewheelin Bob Dylan. I totally forgot that my own dad had one just like it and I borrowed it a lot until I kept and probably lost it. 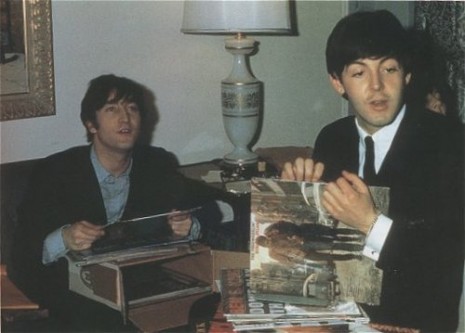 A lot of folks have gone out of their way to find pictures of John wearing THAT jacket on the web…
.

from BeatleSuits.com (thanks, Ray Brandes) 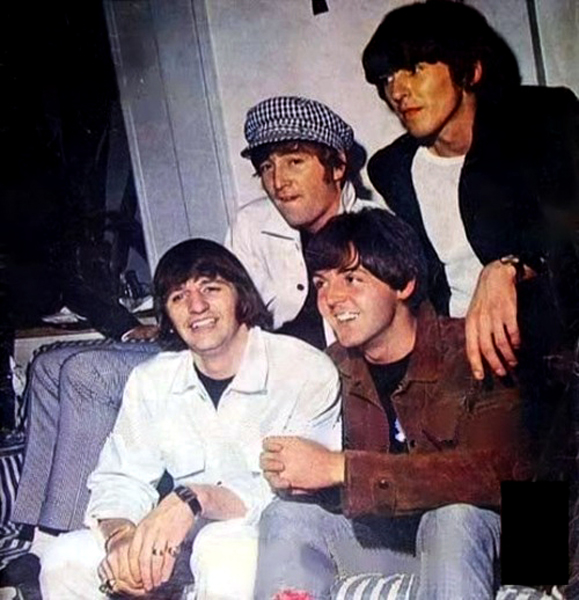 From So I Can Die Easy‘s tumblr album  “The Rubber Soul Jacket”: 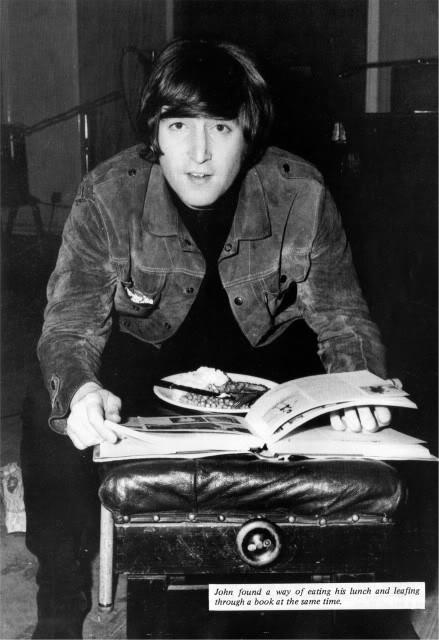 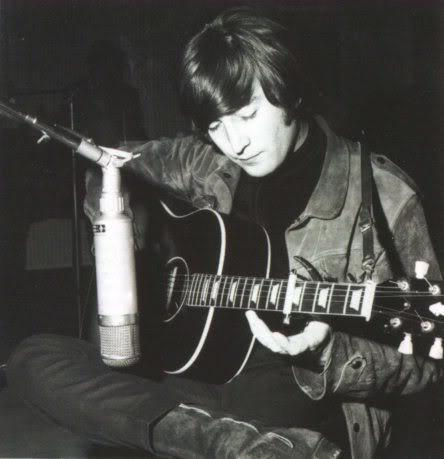 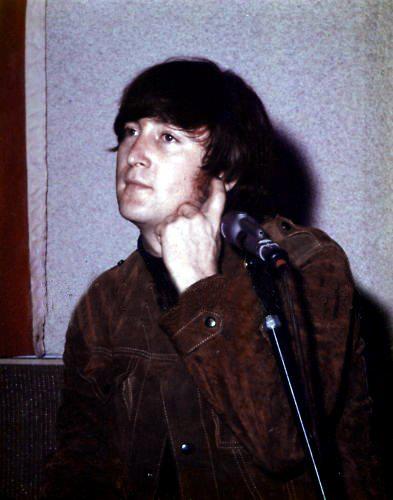 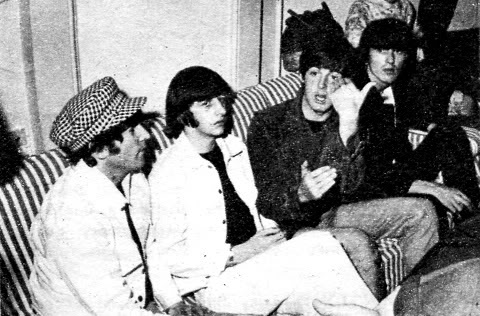 Is that George wearing it?!

So where is THE jacket now?  Hard Rock Cafe, of course.  They keep it at their Memorabilia HQ and it goes on tour. On their site they call it “our greatest piece of Beatles wardrobe”. 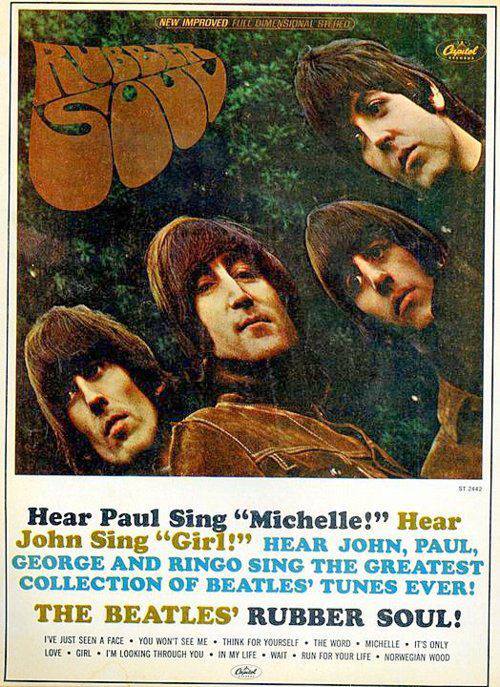 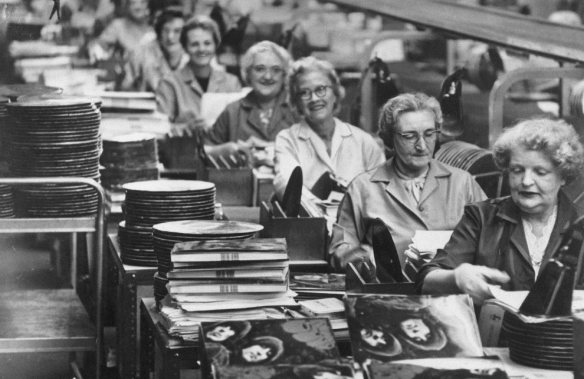 Rubber Soul quality control. Thanks to Ray Brandes for finding this one.

Ray Brandes has been finding lots of shots of the jacket for months but this one I couldn’t resist adding to the collection. It’s a nice photo from the “Intermission” scene in Help! The color is so washed out in the film that you couldn’t tell that he was wearing it but there it is, plain as day and Paul might be wearing his too…

Check out FAMOUS ROCK/ROLL IMAGE OUTTAKES VOL 1 and even MORE OUTTAKES on our Facebook page or our “BEATLESS” photo gallery full of rare, interesting pictures of that one band.  Make sure to “like” us to keep up on when we feel like sharing.  My giving nature comes from my Jewish upbringing.  I’m not sure where my atheism came from.